A Donor Presented to the Virgin

Abraham Casting Out Hagar and Ishmael

Allegory of Painting and Sculpture

Angels Weeping over the Dead Christ

Apparition of Christ to the Virgin 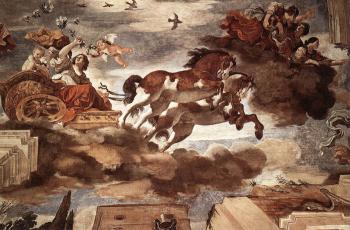 Parable of the Lost Drachma

Return of the Prodigal Son

Samson Captured by the Philistines

Semiramis Receiving Word of the Revolt of Babylon

St Augustine Washing the Feet of the Redeemer

St Luke Displaying a Painting of the Virgin

Susanna and the Elders

The Entombment of Christ

The Flagellation of Christ

The Martyrdom of St Peter

The Patron Saints of Modena

The Resurrected Christ Appears to the Virgin 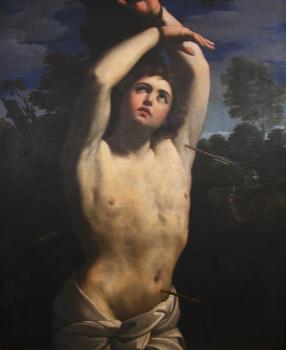 Giovanni Francesco Barbieri (February 8, 1591 - December 9, 1666), best known as Guercino or Il Guercino, was an Italian Baroque painter from the region of Emilia, and active in Rome and Bologna. Guercino is Italian for squinter, a nickname that was given to him because he was cross-eyed. He is especially noted for his many superb drawings. Guercino was born at Cento, a village between Bologna and Ferrara. By the age of 17 he was associated with Benedetto Gennari, a painter of the Bolognese School. By 1615 he moved to Bologna, where his work earned the praise of an elder Ludovico Carracci. He painted two large canvases, Elijah Fed by Ravens and Samson Seized by Philistines, in what appears to be a stark naturalist Caravaggesque style (although it is unlikely he had been able to see any of the Roman Caravaggios first-hand). They were painted for Cardinal Serra, Papal Legate to Ferrara. The Arcadian Shepherds (Et in Arcadia ego) was painted in 1618 contemporary with The Flaying of Marsyas by Apollo in Palazzo Pitti. His first style, he often claimed, was influenced by a canvas of Carracci in Cento. Some of his later pieces approach rather to the manner of his great contemporary Guido Reni, and are painted with more lightness and clearness. Guercino was esteemed very highly in his lifetime. He was then recommended by Marchese Enzo Bentivoglio to the Bolognese Ludovisi Pope, Pope Gregory XV. His two years (1621-23) spent in Rome were very productive. From this stay date his frescoes of Aurora at the casino of the Villa Ludovisi and the ceiling in San Crisogono (1622) of San Chrysogonus in Glory; his portrait of Pope Gregory (now in the Getty Museum, and, what is considered his masterpiece, The Burial of Saint Petronilla or St. Petronilla Altarpiece, for the Vatican (now in the Museo Capitolini). The Franciscan order of Reggio in 1655 paid him 300 ducats for the altarpiece of Saint Luke Displaying a Painting of the Madonna and Child (now in Nelson-Atkins Museum of Art, Kansas City). The Corsini also paid him 300 ducats for the Flagellation of Christ painted in 1657. He was remarkable for the extreme rapidity of his execution-he completed no fewer than 106 large altar-pieces for churches, and his other paintings amount to about 144. In 1626 he began his frescoes in the Duomo of Piacenza. Guercino continued to paint and teach up to the time of his death in 1666, amassing a notable fortune.
Read more